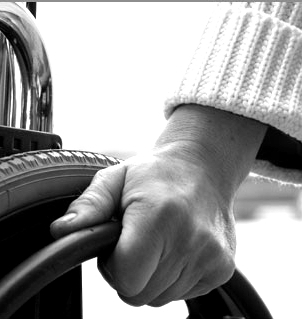 Adelaide City Council will spend up to half a million dollars making a disability-friendly playground accessible to people with disabilities.

The playground, which opened last year, is named in honour of Quentin Kenihan.

Mr Kenihan was born with a serious bone disease called osteogenesis imperfecta, and was known as the "little Aussie battler" because of his strong advocacy for people living with disabilities.

He died in 2018 while working with the council's administration on plans for an accessible playground.

After the $1.3 million park was opened, Adelaide Councillors Mary Couros and Phil Martin were presented with concerns from the families of children with disabilities.

The playground had a number of trip hazards, was shaped in a way that made it difficult to access for people in wheelchairs, and did not have enough nearby disability car parks.

While special, disability-friendly equipment was installed, the playground did not have adequate signage to explain how the equipment should be used.

The council has now agreed to fundin upgrades to bring the facility in line with the Disability Discrimination Act.

Lord Mayor Sandy Verschoor said that if Mr Kenihan was still alive, the park “would have probably been done right in the first place”.

She said the council would fulfill Mr Kenihan’s vision for a playground where everyone could play together, no matter their abilities.

“He just wanted to be in a playground with all other kids — and kids don't differentiate the way adults do,” Cr Verschoor said.

The playground will be officially re-opened later this year.

The council says it had to prematurely open the playground last year because a $1 million funding agree­ment with the State Gov­ernment dictated it had to be operational by December.