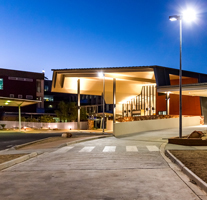 Experts have reported on asbestos contamination at the Alice Springs Hospital.

The Central Australian Health Service has received a report saying there was a “minimal risk” of contamination to people in the working area of the hospital’s pathology lab.

The pathology unit reportedly stayed open for several days after a contractor reported finding asbestos in the ceiling.

The service has contacted its own staff about the development, but not the nearly 60 patients who had visited the building for pathology work.

The director of medical services, Sam Goodwin, defended the decision not to contact patients.

“It's important that we give the right advice at the right time in a way that people can understand it,” Mr Goodwin told the ABC.

“It's not helpful that we would create a frenzy or create panic and worry by virtue of contacting people without the information that they need to make informed choices.”

General manager Naomi Heinrich said no asbestos was disturbed after its discovery, but said she “would need to confirm” the time period between the asbestos being reported and the decision to shut down the pathology unit.

“We followed the advice of expert hygienists, expert licensed asbestos removalists and make decisions based on that,” she said.

“The decision was made in absolute collaboration with NT Work Safe who have provided support to us along the process.

“[The contractor] didn't start disturbing the asbestos, it was around the preliminary work that was undertaken.

“A sample was taken to test, the sample did indicate there was asbestos containing material, we took the precautionary measure to remove patients and staff from the building, undertake significant further sampling to test the building, to ensure its safety.”

Alice Springs Hospital will be outsourcing its pathology services until the situation is resolved.

“The primary limitation really is around time to result.”

Dr Goodwin said semi-urgent tests would be sent to Tennant Creek, around 500kms away, while routine results would come from Darwin or Adelaide.