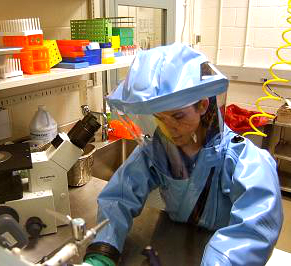 Officials have confirmed an Ebola outbreak in Guinea is responsible for the deaths of at least 59 people.

The deaths had been a mystery to local authorities, but investigations in a French lab have confirmed the presence of the incurable condition.

Symptoms of Ebola include fever, diarrhoea, vomiting, bleeding and a fatality rate of around 90 per cent.

“We are overwhelmed in the field, we are fighting against this epidemic with all the means we have at our disposal with the help of our partners but it is difficult. But we will get there,” an embattled Dr Sakoba Keita, head of the Epidemics Prevention Division for Guinea's health ministry, told reporters from AFP.

“The Ebola fever epidemic raging in southern Guinea since February 9 has left at least 59 dead out of 80 cases identified by our services on the ground.”

World Health Organisation officials now warn cases with similar symptoms have shown up near the border between Guinea and Sierra Leone.

Sierra Leone's chief medical officer, Dr Brima Kargbo, says a 14-year-old boy has died in the town of Buedu in the eastern Kailahun District after he travelled to Guinea to attend the funeral of one of the outbreak's earlier victims.

Medecins Sans Frontieres (MSF) says it is responding as quickly as possible, sending more experts to strengthen its team of 24 doctors, nurses and other authorities in hygiene and sanitation already on the ground in Guinea.

MSF is also sending 33 tonnes of medicine and equipment and setting up quarantine and treatment units across several affected towns in Guinea.

Ebola was first discovered in the Democratic Republic of Congo (DRC) in 1976. The most recent outbreak in the DRC killed 34 people between May and November 2012.