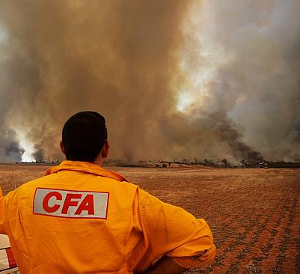 The United Firefighters Union has accused Victorian authorities of sending its members to battle the Morwell mine fire with inadequate protection from poisonous fumes, and against the warnings of its own expert.

The union says it has a seen a secret consultant’s report saying all firefighters should have worn a breathing apparatus, and questioning the effectiveness of carbon monoxide measurements.

They say the report specifically warned of the potential effects of carbon monoxide poisoning.

Several firefighters were taken to hospital after heavy exposure to carbon monoxide, as a blaze burned at the Hazelwood underground coal mine near the town of Morwell. It raged for 40 days before it could be extinguished by the constant effort of around 200 people.

The United Firefighters Union (UFU) Victorian branch wants WorkSafe to investigate the situation, and look to prosecuting the people in charge.

“The firefighters were not given the option of making a decision based on the knowledge of this consultant,” UFU state secretary Peter Marshall told the ABC.

“They were just deployed like robots, like canaries into that situation that the MFB and CFA's own consultants said was unsafe... somebody needs to be accountable for that,” he said.

Victorian Fire Services Commissioner Craig Lapsley says the authority recognises there were problems with carbon monoxide monitoring in the early days of the fire, but has denied any attempt to cover up important information.

He says all will be revealed in an upcoming judicial inquiry into the Morwell blaze.

“Fire and hazmat don't normally come together and this is one of those critical things... it's such a different fire in many ways,” he told reporters.

“We will be submitting this stuff to make sure it goes to the board of inquiry to make sure they understand the extent and the challenges that were faced in such a critical fire.”

They will investigate the source, cause and conditions of the fire, as well as the actions of the mine owner, public health authorities and emergency services.