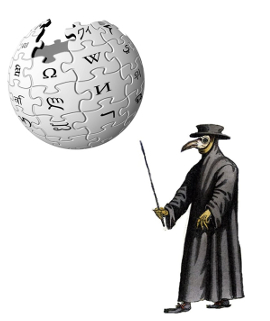 Despite many universities and school condemning the use of Wikipedia as a legitimate source, a new study says thousands of research papers happily cite the open source encyclopaedia.

The practice seems particularly prevalent in the medical community, but this may have some pitfalls.

Canadian researchers conducting the study have warned that because anyone can edit the articles on Wikipedia, using them to inform medical practice comes with some pretty obvious risks of misinformation.

The practice has touched even the most credible journals, including the British Medical Journal (BMJ), in which the Wikipedia report was itself published.

Oddly, the authors of the latest paper say it appears the Wikipedia referencing has increased several times in the last three years.

“The biggest surprise was the trend,” said Dr. Sylvain Boet, a health researcher at the Ottowa Hospital.

“It’s exponential … It goes against all the principles of scientific reporting and referencing.”

The problem is often not the accuracy of the information; the Wikipedia community actually has a separate subsection of expert editors purely for medical entries, called WikiProject Medicine.

The main issue is that the articles are often brief, and tend to aggregate and summarise information, rather than provide the full breadth of the reports from which it is compiled.

This means that important information can be overlooked, and the sorting process that may be necessary for key elements of a case is not performed by someone familiar with that specific patient.

As an initial source or to understand broad concepts Wikipedia is still almost without peers, but “the possibility for the spread of misinformation from an unverified source is at odds with the principles of robust scientific methodology and could potentially affect care of patients,” the paper concludes.

The site itself discourages the practice, saying “for many purposes, but particularly in academia, Wikipedia may not be an acceptable source”, and reminding readers that “anyone in the world can edit an article, deleting accurate information or adding false information.”

The articles appeared in some of the foremost journals for their fields, including Nature, Science, The Lancet Infectious Diseases and The Annals of Internal Medicine.

Analysis suggests the majority of Wikipedia citations were for broad definitions or descriptions of medical and scientific terms or concepts, though some were for historical and statistical references.