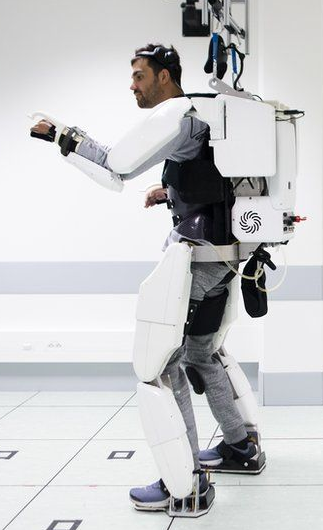 A paralysed man has used a four-limb exoskeleton controlled by his brain to walk once more.

A whole-body exoskeleton, operated by recording and decoding brain signals, has helped a tetraplegic patient to move all four of his paralysed limbs, according to a new study.

While it is still very early days, researchers say the four-limb robotic system could have the potential to improve patients’ quality of life and autonomy.

“Ours’ is the first semi-invasive wireless brain-computer system designed for long term use to activate all four limbs,” says Professor Alim-Louis Benabid from the University of Grenoble, France.

“Previous brain-computer studies have used more invasive recording devices implanted beneath the outermost membrane of the brain, where they eventually stop working. They have also been connected to wires, limited to creating movement in just one limb, or have focused on restoring movement to patients’ own muscles.”

The 28-year-old patient in the trial was paralysed from the shoulders down, with only some movement in his biceps and left wrist.

He was able to operate a wheelchair using a joystick controlled with his left arm.

Two recording devices were implanted one either side of his head between the brain and the skin, to span the sensorimotor cortex (the area of the brain that controls sensation and motor function).

Each recorder contained a grid of 64 electrodes which collected brain signals and then transmitted them to a decoding algorithm. This system translated the brain signals into the movements the patient thought about, and sent commands to the exoskeleton to complete them.

Throughout the 24 months of the study, the patient did various mental tasks to train the algorithm to understand his thoughts and to progressively increase the number of movements he could make.

This included controlling a virtual avatar to play a video game (he played a game similar to Pong), reach for targets with an avatar and in the exoskeleton, and walk.

Three further patients have been recruited and the trial is ongoing. The next goal of the researchers is to solve the problem of allowing a patient to walk and balance autonomously without using a ceiling suspension system.