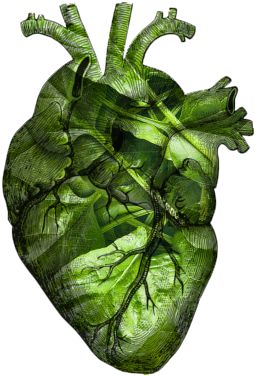 Researchers in the US have developed a new way to grow a vascular system, using the branching network of thin veins that deliver water and nutrients to the cells a spinach leaf.

“The main limiting factor for tissue engineering … is the lack of a vascular network,” says study co-author Joshua Gershlak, a graduate student at Worcester Polytechnic Institute (WPI) in Massachusetts.

“Without that vascular network, you get a lot of tissue death.”

The team essentially co-opted plant veins to replicate the way blood moves through human tissue. They did this by stripping spinach leaves of their normal plant cells to create an empty frame made of cellulose.

The stripped plant frame was bathed in live human cells, allowing the human tissue to grow on the spinach scaffolding and fill in its tiny veins.

Once their spinach-based mini-heart was complete, the team was able to send fluids and microbeads through its veins, demonstrating that blood cells can flow through the system.

The experts are working toward being able to replace damaged tissue in patients who have had heart attacks or other catastrophic heart damage.

They hope that the veins in the modified leaves could be used to deliver oxygen to replacement tissue, allowing it to generate new heart matter.

“We have a lot more work to do, but so far this is very promising,” said study co-author, WPI’s Glenn Gaudette.

“Adapting abundant plants that farmers have been cultivating for thousands of years for use in tissue engineering could solve a host of problems limiting the field.”

The study is published in the journal Biomaterials.