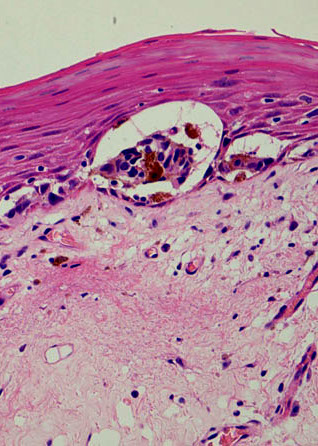 Australian researchers say they have found a protein molecule linked to melanoma outcomes.

A team from the University of South Australia’s Centre for Cancer Biology says the newly-discovered protein may determine the fate of people with the disease.

Australia has the highest rate in the world for melanoma, and the disease is almost universally fatal if it spreads to other organs.

Over 15,000 Australians will receive a melanoma diagnosis this year, with 95 per cent of cases caused by unprotected sun exposure.

However, other risk factors exist.

The new study shows that melanoma patients who express the desmoglein-2 (DSG-2) protein are two-and-a-half times more likely to die within 10 years.

Lab work has already uncovered potential ways to block the protein using nanotechnology, while ongoing research efforts are finding ways to better isolate the patients most at risk.

“By injecting a cancer-cell-seeking molecule intravenously, we can find the melanoma cells with high levels of DSG-2 and attack them, reducing their severity,” lead researcher Claudine Bonder says.

“We already know that in people with lower levels of this protein, the melanoma does not grow as quickly, and we have a better chance of arresting it.

“We’re confident that we can identify the subgroup of patients that have elevated expressions of DSG-2 on their cancer cells.

“We’re also confident that we can block this protein on the melanoma, giving patients a better outcome.”

She says that while Australia is very familiar with melanoma, it is still misunderstood.

“Melanoma can appear in the eye, nose, mouth and genitals. What we do know is once it spreads beyond the skin into vital organs such as our lungs, liver or brain, it is almost always fatal.”

Opportunities to support the important work are available here.

Also this week, Prime Minister Anthony Albanese and Victorian Premier Daniel Andrews have appeared at The Alfred Hospital in Melbourne to mark the beginning of construction of the Victorian Melanoma and Clinical Trials Centre.

The $152 million centre is being built alongside The Alfred on St Kilda Road.

Mr Albanese says melanoma is known as “Australia's cancer” and that early detection would be the key to treating it.